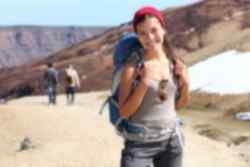 How to let go: Advice for letting your child get on with their travels

It's a parent's instinct to worry, and this may certainly be your first response when your son or daughter first pipes up with the idea of going on a gap year. Parents may feel they know best, but try to trust that your child will know whether or not they are ready for a gap year. Going on a gap year can be the perfect way for your son or daughter to prepare for the transition from adolescence to adulthood, bridging the gap between school or college and the next step into the real world.

Let them grow up

You may think that they aren't ready yet, or are too immature, but if anything, that's a good reason to let them go! Travelling will provide the freedom and experience needed for them to grow as a person, so it’s important to let them get on with it. They'll return with incredible stories and unforgettable memories, but will also have learnt to be far more responsible, organised and worldly-wise.

Your son or daughter may have lived in the same area for the majority of their life, so it's most likely that they are itching to explore the outside world. Remember, it's their gap year, so although you might think it more worthwhile for them to spend six months volunteering, their dream trip may be to backpack around South America or surf the Australian coast. Respect their decisions and let them get on with making their first independent choices about their travels. Wherever they end up going, a gap year will undoubtedly broaden their horizons.

Parents can sometimes see gap years as a waste of time and money, and can worry about the practicalities, such as financing issues. A gap year can help their future career, as an increasing number of universities and employers recognise that those who have travelled during a year out are far more responsible and experienced than those who have gone straight from secondary education into the workplace or higher education. Having completed a gap year demonstrates determination and dedication, financial management and strength of character, making your son or daughter a far stronger candidate for future jobs.

You may be quite reluctant to let go of knowing what your child is doing and where they are going, especially letting them have free reign in a far-away destination. Careful planning and staying in touch while they are away will ensure that you at least have an idea of where you son or daughter is and what they are doing. Gap years are an incredible opportunity and thousands of young people decide to go travelling each year, so give your son or daughter their first taste of freedom and let them get on with one of the most unforgettable experiences of their lives!

Browse over 200 trips and 50 locations from the comfort of your own home! Send me a FREE brochure!